I had a bit of a revelation yesterday.

“Revelation” is a dramatic-sounding word, I know, but I can’t think of what else to call it.  I was standing on the curb, surrounded by a small crowd of Halifax locals. It was Natal Day, a big local celebration, and I had arrived in time to catch a glimpse of the parade.

The parade went by. People cheered. Some overly chipper marketing girls offered cans of Red Bull, which almost everyone accepted–because, you know, 10:30 in the morning seems like the right time for that.  Maybe, maybe I can blame my “revelation” and its feelings (so many feelings…) on hardcore stimulants and my sleepy brain. Really, though, the reflection was long overdue.

As I stood there–clapping for someone else’s community, drinking 10 am Red Bull with wise-cracking locals, preparing to take in their Busker Festival for a third day–I tried to compare the celebration with parades in Ottawa.

I have never been to a parade in Ottawa.

I could barely compare it to parades in my hometown, Kitchener-Waterloo.  As for the busker festival, all I had were vague childhood memories of the Waterloo Buskerfest.  I hadn’t actually checked it out since I was a kid.  I certainly hadn’t spent time at Ottawa buskerfest, despite the fact that it was happening on the street I work on the day before I left.

Yes, the day before I left to go watch another city’s Buskerfest.

In between acts, I found quiet spots along the waterfront to read. “Kinda like reading along the Rideau canal,” I thought. But I wasn’t really sure.  I couldn’t remember the last time I took a book to the Ottawa “waterfront,” the beautiful river a few minutes from my house.  The thought made me strangely sad.

Don’t get me wrong. It has been awesome to check out a new community, to test drive this beautiful East Coast city for a few days. But there was something uncomfortable about how actively I was checking it out, talking to people, and enjoying the environment. It was uncomfortable because, frankly, I don’t do this enough at home. Even though I could. Even though I should. 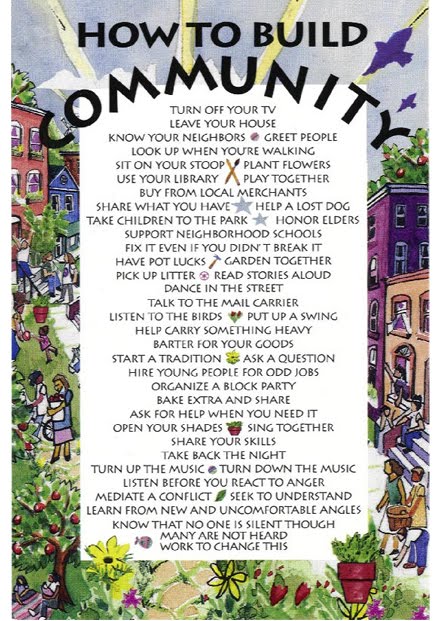 This wasn’t supposed to be one of those trips where I “find myself”! I wanted to learn about other people and places! How am I getting so reflective only 3 days in?

And yet, I have already learned things. Very personal, real things. Things I can actually take home with me. I hate how romantic and empty that sounds, like I just skipped through a field of roses, and found God, and “Oh, friends, you wouldn’t understand.” I don’t want to be one of those people who talk about traveling like there’s no other way to live or learn (though, if you have the resources, I highly recommend it).

I was hoping to have a quirky, hilarious, bizarre trip to share with you.

Instead, I think I’m winding up with a meaningful one.  Awkward.

I’ve had some other so-called “revelations” during my time in Halifax. I got it into my head that want to make a documentary about buskers (okay, so that was one of my less practical considerations). I also decided I need to read a lot more than I do. My faith is getting more and more present-tense oriented, (“Will everything be okay? Let’s go with yes. Even if it’s not okay, it’s okay. Right, Jesus?”).  I’m unnerved by how happy I am traveling alone, making friends for one night and then moving on.  It’s a weird brand of loneliness that really just feels like freedom. Maybe its temporary, but I’m glad I feel this way.

I’m learning about myself, damnit. I guess that’s how this goes.  I’m more of an introvert than I thought. I’m more anxious and fiddle-y than I thought.  I’m much kinder and wittier than I thought, too; I guess when you only have a few social interactions, you really give them your all.

And, thanks to years of playing serious Tetris, I also seem to be pretty alright at getting a lot of things in a teeny-tiny bag.

Okay, I’m feeling self-conscious about this post.  I did my best, but it’s entirely possible that the whole thing is dripping with twenty-something sap.  To make it up to you, here’s a weird picture of me brushing my teeth in a rickety old hostel: 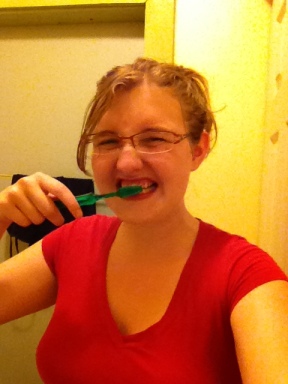 7 thoughts on “That Awkward Moment When You Start Finding Yourself”