“If you want to make God laugh, tell Him your plans”
– Woody Allen

I started teaching Sunday School this year. A group of 5 or 6 wonderful, wonderful wide-eyed girls (age 7 to 12) stare expectantly at me in our small church clubhouse, every week. Every. Week.

I don’t know why they’re all girls. It just worked out that way. Since my siblings are all capital-D Dudes, this is definitely new territory.

For better or for worse, I can be a wishy washy teacher. I know it, and so do the parents. I’m a goofy, guitar-strumming, United-Churchy-Half-Agnostic-Historian-Jesus-Feminist, so honesty and nuance rule the day: I can teach biblical literacy. I can teach general values. But, no, I don’t know what exactly really happened, or what exactly we’re supposed to get out of these stories. I have no indoctrination-esque end goal, not really. I just teach what I understand, whatever that means. And maybe the girls will be inspired and Jesus it up and light a candle. Or maybe, they will raise their hands and shout “Shauna, that’s craziness.”

As long as they’re using their minds and their hearts at all times, it works for me.

And so it goes: Insert life lesson here. Insert scripture here. We make thank you cards. We celebrate holidays (and normal days, too). We laugh and we read and we use way too much glitter. Money is raised for charity. Songs are written.

“Okay girls, I’m going to turn away from you for 10 seconds. When I turn back I want to see you all sitting calmly on the couches. 1…2…”

Last week, we were starting the Christmas story. Yeah. I was worried. The whole “Mary” narrative is a difficult subject for a United-Churchy-Half-Agnostic-Historian-Jesus-Feminist (who really doesn’t want to explain the word “virgin” to your 8 year old). My carefully-crafted plan was to talk about how our plans and goals are good, but God is great—basically, it was this article steeped in Bible-talk.

Yeah, my plan was to talk about how shaky plans are. I’m an irony whiz, clearly.

I pulled out the markers and paper, suggesting that the girls draw pictures of their lives 20 years from now. They took to the project immediately, drawing themselves as Olympians, doctors, zoologists, geologists, rebel graffiti artists… the works. Some of them were very careful, drafting their dreams in pencil first. One was hyper-detailed and ambitious, another was just plain goofy. By the time I was ready to explain the point of the exercise, they were too excited by their dreams to really care about my message. I wrapped it up quickly:

My plan hadn’t really worked. Their plans were strewn around the classroom in bright, goofy marker.

And somehow, it was all perfect anyways.

“If you want to make God laugh, tell Him your plans.”  I used to see these words as an invitation to avoid plans altogether.  But as I felt my classroom shake with the joy of best laid possibilities, I reconsidered.

God probably likes to laugh. Laughter is good. Silliness and vulnerability and hope are good.

Plans are not bad in and of themselves. They’re actually kind of beautiful. Those dream-fueled drawings in my Sunday School classroom were beautiful.  Same with the laid-back, loving lesson plans. Same with your fallible to do list, daydreams, and drive for the future.

Plans happen when our gifts and dreams and brainwaves and feelings manifest into a motivational timeline. And when those plans don’t totally come to fruition, that doesn’t mean they were wrong. It just means something else became right.  It means that life is beautiful in a very different way than plans are beautiful.

For my part, I’m going to continue making and breaking lesson plans. The girls are probably going to keep dreaming and suggesting.  We’re all going to keep changing. And that’s okay. That’s okay.

Let me start by admitting that I am a born overanalyzer. I can totally find symbolism that doesn’t actually exist. I’m so good at reading subtext, I end up creating subtext.

Sometimes this leads to insight. Mostly, though, it leads to my mother saying “Pffffft yeah, okay then, kid.”

This weekend, I was at it again. I was at the Just For Laughs Festival in Montreal, desperately seeking a thoughtful, patriotic story I could tie in with my cross-Canada trip (or, as my Eastern European grandfather called it in an email last week, “the BACK-PK TRAVEL GO WEST YOUNG WOMAN “).  I had been watching Canadian comedians like Jay Barachul and Mark Little (who you should all check out because he is hilarious) at the Festival for days, and had a notebook full of words ready for me to twist outside of their actual meaning.

My “Media” badge was staring me down. Canada. Comedy. There has to be a story here.

I considered digging into the CRTC, or geoblocking, or something else technical/policy related.  I collected evidence against the infuriating Vanity Fair article “Of Moose and Men,” which claims Canadians aren’t funny.  Maybe, I could approach bilingualism and language in comedy.  Or maybe, I could pick out enough Canada-specific humour; lay on the superficial psuedo-identity.

Basically, I had it in my head that there is such a thing as “Canadian Comedy.”  There has to be. I just needed to figure it out. Maybe sit and eat timbits watch reruns of Kids in the Hall and This Hour Has 22 Minutes for a week straight. You know, research.

Despite this enthusiasm, I struggled to find a real story at the Festival.  I figured my opportunity would come on Friday night’s Homegrown Comic Competition, an annual showcase of young Canadian standup. This was going to be a goldmine of Canadianisms! The advertisement had a maple leaf and everything! 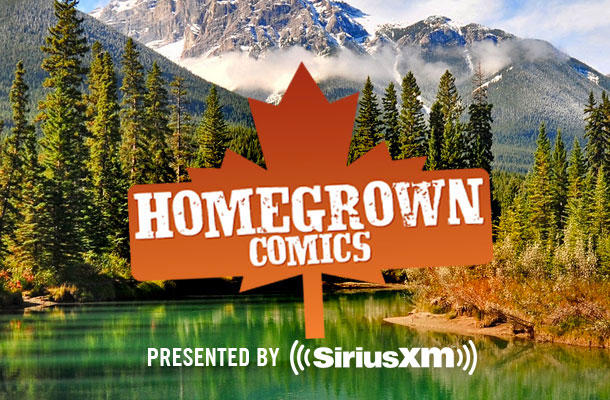 The good news is that there was a commonality between several of the performers, something beyond just Citizenship. There was something that stuck out, something unique that that really resonated with the audience.

The bad news is, that thing was jokes about menstruation.

I’m good at finding meaning in just about everything. But I’m not that good.

In a free country, chances are someone will be using that freedom to make people laugh.  In a capitalist country, this “someone” will probably go wherever that skill is most marketable. And in a massive country (say, around 9,984,670 km²), different people in different places will probably find different ways to make people laugh. So yeah, Canada has entertainers. And those entertainers are a big cultural export, especially in the American biz.

I felt deflated. Unless I wanted to sound off about Canadian broadcasting policy, or confirm that Just For Laughs is an amazing festival, it seemed that my nationalistic meaning-finding was just about over.

But then I remembered an earlier conversation, some small talk with an Australian guy in my hostel room.  We were talking about our plans for the night, and I mentioned the Homegrown Competition.

(Note: I’m very articulate when talking to strangers. That morning, I spent a full minute trying to pronounce my own name as I fumbled through awkwardly introducing myself to Dan O’Brien from cracked.com. So much charm, so little time.)

He nodded. “Yeah, well, that’s what they’re known for. Funnier than Americans, that’s for sure.”

The guy had hit my Canadian comedy fan g-spot.  I melted, shooting an appreciative grin his way.

I couldn’t prove what he said to be true.  I didn’t know what it meant or where he got it, really. I agreed because I am patriotic, and because Canadians have a pretty good track record of making me laugh–not because I could prove he was actually right.  There is no defensible argument for borders and geography affecting hilarity, unless you make some long-winded historical argument or factor in the education system to an extreme.

I’m not willing to do that here.

I didn’t find my story about “Canada. Comedy.” on stage at the Just For Laughs Festival. It wasn’t a certain brand of funny, something I could understand by over-analyzing comedians and collecting quotes. Instead, my story was in that hostel room.  It was the fact that the Festival exists at all, and that people from around the world have heard of it.  The fact that the Homegrown Competition is a thing.  The fact that people from other countries believe Canadians to be funny (how great of a reputation is that?!).

Mostly, it’s the fact that fans like me get excited by even the idea that Canada has an identity, and that the identity involves funny people.

Also, this foreign stranger saying “Canadians are funnier than Americans,” is the best pick-up line I’ve heard in months.