This is my fifth attempt to write this post. The more I try to succinctly capture my thoughts on death and grieving, the more disjointed and incoherent my writing becomes. Putting the experience to paper has opened old wounds, wounds that should be better healed by now—it’s been almost four years. As I try to write about it, I realize I’m not as close to the elusive acceptance stage as I thought.

I’m not sure what to say about my dad’s death that I haven’t already. I’ve written about it a lot on my own blog, probably too much really, but I generally try to bury a lot of what I feel within some sort of lesson I learned in the process to make it more palatable.

Raw grief is hard to write and to read. It reminds us of our own experiences with it. It reminds us that more death is coming–that it is coming for us eventually and we don’t know when.

My dad died from small cell lung cancer caused by a lifetime of smoking. 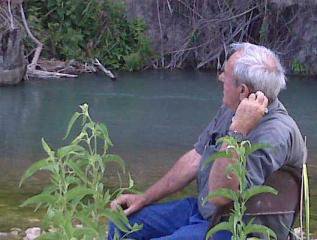 I had nine months after his diagnosis to “prepare.” I had time to be there for him in a way that took cancer for me to be there for him. To make my apologies, to forgive old resentments, to tell him and show him how much I loved him. But those months also gave me time more time to mess it up. To be human and harsh, and finally to have a sick feeling of relief infiltrating my grief when he did pass.

And even though I knew it was coming, I was not prepared.

I was not prepared for the business of funeral preparation and estate settling. Because in the most painful days of your grief and loss, you aren’t allowed to wallow, you are forced to make decisions. How do we get them to the funeral home? When will the funeral be? He didn’t leave instructions for what he wanted; burial or cremation? How did we sit in his house for nine months and never have this conversation? Did your father have any steel parts? Hip replacement? Anything? We need to know that if you choose cremation—steel parts won’t burn. Oh my god, STOP talking about burning. What songs would he want played at his service? Who should speak on his behalf? How many death certificates do you need?

I’ve never been so relieved to be the youngest child than I was during funeral week. My brothers made most of these decisions while I sat around blubbering and worthless. The only thing I was prepared for was casserole. So many casseroles.

I was not prepared for the anger I felt toward tobacco, or the defensiveness I felt every time someone asked me if he smoked when I told them of his diagnosis and death. Followed by an almost smug nod that implied he deserved what happened to him. When a person dies of a sudden heart attack, no one would dream of asking the family if that person stuffed their faces with burgers and bacon every day. But with lung cancer, they feel justified asking this as if the loss should be less devastating because everyone knows smoking causes lung cancer. Fuck you.

I was not prepared to wake up every morning for almost a year and have my first thought be, “My dad is gone.” I was not prepared for the guilt I felt when I didn’t have to remind myself anymore–my brain just knew.

I was not prepared for alcohol to stop providing solace and numbness as I tried to move on with my life after his funeral but it did. Eventually I just became aware of how it amplified and distorted everything I was feeling. So I stopped getting drunk.

I was not prepared to spend the next year marking off firsts without him. Wanting to post them to Facebook so people would remember—he’s still gone and it still hurts. Please don’t forget him…or me.

I was not prepared when the “seconds” without him weren’t much easier.

I was not prepared to have grief join me in the delivery room when my daughter was born. What should have been the happiest day of my life was tinged with sadness and anger that my daughter will never know her grandfather.

I was not prepared to feel rage every time someone complained about their pain in the ass dad. To not be able to stop myself from saying and thinking, “Forgive. Be grateful. Stop whining. You still have a dad. You don’t know how guilty you will feel about this later. You don’t know that this conversation is no longer okay in front of me. You don’t know…but you will.”

I was not prepared to begin to hate platitudes in all forms, but mostly the religious ones. “Everything happens for a reason. He’s in a better place. God’s ways are not our ways. Don’t grieve as one who has no hope.” And my least favorite, “God doesn’t give us more than we can handle.” That, my friends, is bullshit. Tell that to a mom who has lost her child. God gives us more than we can handle all the time; what he doesn’t give us is much of a choice in the matter. We can handle it well or poorly but handle it we must—the only other choice is to give up and check out. Life moves on with or without you.

I wasn’t prepared to stand in the garage on Super Bowl Sunday with a friend who lost his mom four months ago to lung cancer on the same day his third child was born and find myself at a loss for words. All I could do was listen, to try not to story top or compare, to let the understanding pass between us, and say, “I know. It’s hard. It gets easier. You are not alone. It’s okay to talk about it for as long as you want to. It’s okay to feel however you feel about it. Some of these feelings never go away. We just get better at handling them.”

No, I was not prepared.

I’m not sure you can be.

Next Article: “The Things I Never Did” >>

2 thoughts on “I Was Not Prepared”